What Does SUL Mean?

SUL means "See You Later." The abbreviation SUL is an informal way of saying "goodbye." SUL should not always be taken literally. (In other words, it should not be taken as a commitment of seeing the other person later.) SUL is often just a friendly way of bringing a conversation to an end.

Below are some other common ways of saying SUL:

When I write SUL, I mean this: 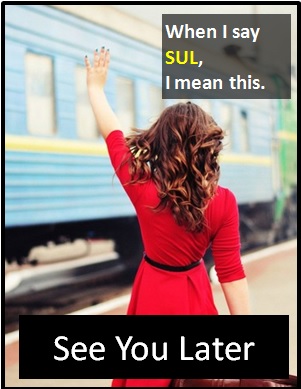 SUL is a way of saying "Goodbye."

Examples of SUL in Sentences

Here are examples of SUL being used in conversations:

An Academic Look at SUL

As it is pronounced using its individual letters (i.e., "Ess Yuu Ell"), SUL is classified as an initialism abbreviation. Initialisms are different to acronyms, which are spoken like words.

Grammatically, SUL is used as a declarative sentence with the meaning "I will see you later." In other words, it is not used as part of speech within a wider sentence.

Before the digital era, we would have just said something like "goodbye" instead of SUL.

Example of SUL Used in a Text