CUSHTY is believed to derive from the Romany Gypsy word Kushtipen, which means "Good." It was one of many catchphrases used by Derek "Del Boy" Trotter, in the hit UK TV series Only Fools and Horses, which ran from 1981 to 1991.

KUSHTI is the title of a Bollywood comedy film directed by T K Rajeev Kumar and released in 2010. The film marked the Bollywood debut of WWE wrestler "The Great Khali," but was a commercial flop.

When I write CUSHTY, I mean this: 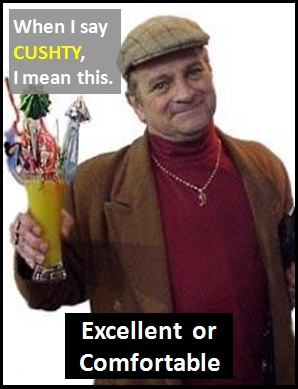 CUSHTY was a catchphrase of "Del Boy."

Examples of CUSHTY in Sentences

Here are examples of CUSHTY being used in conversations:

An Academic Look at CUSHTY

CUSHTY is a slang word , thought to derive from the Romany Gypsy word Kushtipen. Slang refers to words, phrases and uses of language that are regarded as very informal and which are often restricted to a special context or a particular group of users.

Before the digital era, we might have just said "Excellent" or "Comfortable," or something like "Cool" instead of using. CUSHTY.

Example of CUSHTY Used in a Text