What Does CYA Mean?

The abbreviation CYA is widely used with the meaning "See You (Bye)" as a salutation at the end of a message. The use of CYA usually implies that the absence will be of a temporary nature and that the sender will be back in touch. However, CYA is often used by a person who has just been "dumped" to imply that they are not bothered that the relationship has ended.

In a work-related context, CYA is used with the meaning "Cover Your Ass" to refer to actions taken by someone to protect them from possible subsequent criticism, legal penalties, or other repercussions. CYA may include such negative actions as avoiding taking responsibility for something, but may also include positive actions, such as re-checking work and anticipating potential problems.

When I write CYA, I mean this: 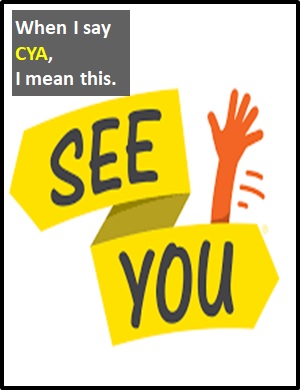 Examples of CYA in Sentences

Here are examples of CYA being used in conversations:

(Here CYA is being used with the meaning Cover Your Ass.)

An Academic Look at CYA

When used with the meaning "See You (Bye)", CYA is an acronym (i.e., an abbreviation spoken like a word). It is based on pronouncing the letters as "C YA," as in "See Ya" or "See You."

When used with the meaning "Cover Your Ass," CYA is pronounced using its individual letters (i.e., "See Why Ay"). In this context it is classified as an initialism abbreviation.

Before the digital era, we might have just said "See You" or "Cover Your Ass," instead of using the abbreviation CYA.

Example of CYA Used in a Text