What Does DAD BOD Mean?

DAD BOD means "Dad Body." The term DAD BOD is used to describe a man whose body is not currently toned as a result of living a comfortable life or taking a break from training. A man with a DAD BOD often feels he no longer needs to maintain an attractive physique, having already found himself a partner.

Of interest, the DAD BOD is becoming increasingly popular with women, many of whom are claiming that men with beautiful bodies are often too self-obsessed and less fun to party with.

When I write DAD BOD, I mean this: 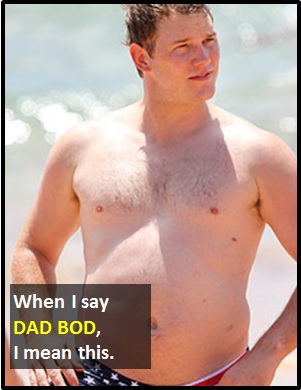 A DAD BOD describes a man with a currently untoned body.

Examples of DAD BOD in Sentences

Here is an example of DAD BOD being used in a conversation:

An Academic Look at DAD BOD

The term DAD BOD is typically used as a noun. Technically, it is a syllabic abbreviation, which is an abbreviation formed from the initial syllables of multiple words (e.g., Interpol from International Police).

Example of DAD BOD Used in a Text