What Does DERP Mean?

The word DERP is used in reply to stupid comment. It became popular following the appearance of Mr. Derp on South Park.

When I write DERP, I mean this: 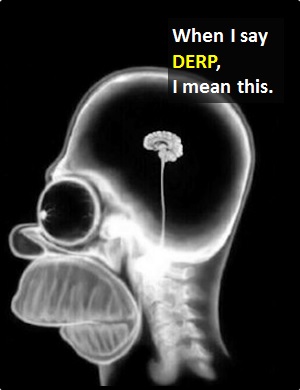 "I'm glad to see you're not letting your education get in the way of your ignorance."

Examples of DERP in Sentences

Here are examples of DERP being used in conversations:

An Academic Look at DERP

DERP is an interjection. An interjection is not grammatically related to any other part of the sentence. It is included in a sentence (usually at the start) to express a sentiment such as surprise, disgust, joy, excitement, or enthusiasm. In formal writing, interjections are offset from the surrounding words with commas. For example:

(DERP expresses a mix of surprise and disgust.)

Before the digital era, we might have said something like "Are you for real?" instead of DERP.

Example of DERP Used in a Text

DERP
Help Us To Improve Cyber Definitions
Please tell us using this form.