DHMU means "Don't Hit Me Up." It's the opposite of HMU (Hit Me Up) (which is a request for a call-back or some other form of contact). In other words, DHMU is a rapid way to tell someone not to call (usually because their call would cause a disturbance). If someone says DHMU, it is usually safe to assume that they will contact you instead.

DHMU can also be used to request no contact at all (i.e., not just during a time of inconvenience).

When I write DHMU, I mean this: 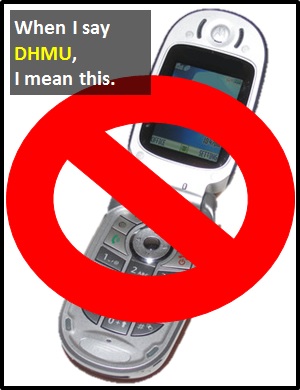 Examples of DHMU in Sentences

Here are examples of DHMU being used in conversations:

An Academic Look at DHMU

DHMU is an initialism abbreviation. Technically, this means it is pronounced using its individual letters (i.e., Dee Aych Em Yu), but as this is harder to say than "Don’t Hit Me Up," it is not often uttered using its letters. In other words, the abbreviation DHMU is for efficiency in writing and not efficiency in speech.

Before the digital era, we might have simply said "Don't call me; I'll call you" instead of DHMU.

Example of DHMU Used in a Text