What Does DIDO Mean?

When used in chat forums or in texting, DIDO is a shortened version of DIDDO, which derives from "Ditto (i.e., Same Again)". Ditto is a typographic symbol indicating that the text is the same as the text immediately above. For example:

"Ditto" originates from the Latin word dictus ("having been said").

To Cut a Dido

The noun "dido" can mean (1) fun or amusement or (2) a prank or practical joke. It is often seen with the verb "to cut." For example:

(He carried out a prank at the party.)

When I write DIDO, I mean this: 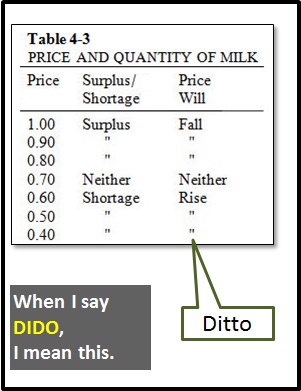 Examples of DIDO in Sentences

Here is an example of DIDO being used in a conversation:

An Academic Look at DIDO

DIDO represents the typographic symbol ". In other words, it is a punctuation mark.

When dido means fun or practical joke (e.g., he cut a dido), then it is a common noun.

Before the digital era, we would have said "ditto" or "same again" instead of DIDO.

Example of DIDO Used in a Text