What Does DL Mean?

The abbreviation DL is used with the meanings "Down Low" and "Download." Here is a little more information about each of these definitions of DL.

DL is widely used with the meaning "Down Low" to refer to something conducted in secret or discreetly. DL often (but not always) implies that such behavior or actions involve a degree of deception or illegality.

The phrase "Down Low" can refer to any action or behavior that can be described as secretive or deceptive. However, especially in the African-American community, it is often used to refer to a man that is a closet homosexual or secret bisexual.

DL is also used to mean "Download," which usually refers to the copying of data from one location or device (e.g., a server, PC, cellphone, tablet or website) to another. However, "Download" is also a slang term, widely used (typically by young men and boys) to refer to the act of going to the toilet to defecate.

When I write DL, I mean this: 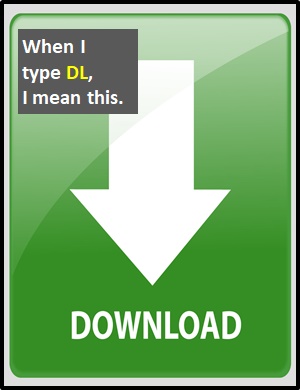 Examples of DL in Sentences

Here are examples of DL being used in conversations:


(Here DL means "Down Low" and implies that Tom is a closet homosexual.)


(Here DL means "Download," but it has nothing to do with file transfers.)

An Academic Look at DL

Whether used with the meaning "Down Low" or "Download," DL is classified as an initialism abbreviation, as it is pronounced using its individual letters (i.e., "Dee Ell"). Initialisms are different to acronyms, which are spoken like words.

When used with the meaning "To defecate," download is a slang word. Slang refers to words, phrases and uses of language that are regarded as very informal and which are often restricted to a special context or a particular group of users.

Before the digital era, we might have said "Down Low" instead of using the abbreviation DL.

Example of DL Used in a Text