What Does DOL Mean?

DOL means "Dying Of Laughter." In the same way that terms such as ALOL ("Actually Laughing Out Loud") and LLOL ("Literally LOL") have emerged to differentiate between a LOL for tone and genuine laughter, the term DOL, meaning "Dying of Laughter" has emerged.

When I write DOL, I mean this: 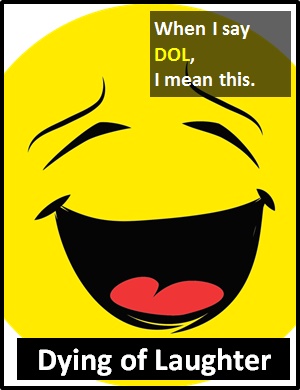 Examples of DOL in Sentences

Here are examples of DOL being used in conversations:

An Academic Look at DOL

DOL Is an Acronym and an Abbreviation.

Like LOL, the term DOL is both an acronym and an abbreviation. In other words, it can be pronounced like a word ("doll") or pronounced using its individual letters ("Dee Oh El"). The former makes DOL an acronym while the latter makes it an initialism abbreviation.

Example of DOL Used in a Text