What Does DWL Mean?

Actual incidents of people dying from laughter are rare, although it usually occurs as a result of cardiac arrest or asphyxiation.

Interestingly, Zeuxias (a 5th-century BC Greek painter) is said to have died laughing at the humorous way he painted the goddess Aphrodite, after the old woman who commissioned it insisted on modelling for the portrait.

When I write DWL, I mean this: 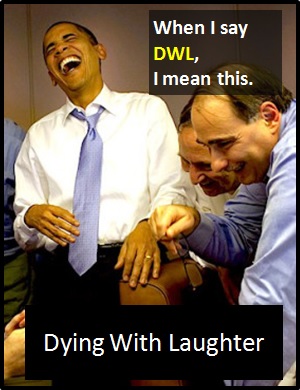 DWL means you are literally laughing so hard, you think you may die.

Examples of DWL in Sentences

Here are examples of DWL being used in conversations:

An Academic Look at DWL

DWL is an initialism abbreviation. This means it is pronounced using its individual letters.

Before the digital era, we might have said something like "I was laughing so hard I thought I would die" instead of DWL.

Example of DWL Used in a Text