DTMWTD means "Don't Tell Me What to Do." The abbreviation DTMWTD refers to a phrase used to dispute an order or request from another person. It is an abrupt response, often delivered in anger or frustration.

Of interest, "Don't Tell Me What to Do" is a song written by Harlan Howard and Max D. Barnes, recorded by American country music artist Pam Tillis and released in December 1990.

When I write DTMWTD, I mean this: 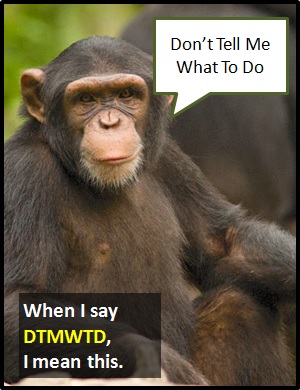 DTMWTD meaning "Don't Tell Me What To Do" will let someone know you're not going to do ask they ask.

Examples of DTMWTD in Sentences

Here are examples of DTMWTD being used in conversations:

An Academic Look at DTMWTD

DTMWTD is typically used as an imperative (i.e., an order).

Example of DTMWTD Used in a Text

DMML (Don't Make Me Laugh) YDMS (You Don't Make Sense) DBD (Don't Be Dumb) DBS (Don't Be Stupid) DEGT (Don't Even Go There) DGT (Don't Go There) DIY (Do It Yourself) DOSSER (Lazy Person) DPI (Don't Push It) DPM (Don't Push Me) WDYMBT (What Do You Mean By That?) Using the music symbols