What Does DUDE FOOD Mean?

The term DUDE FOOD is used to refer to fast food, such as hamburgers, hotdogs, steaks and anything with bacon.

"DudeFood" is the title of a cookbook by Masterchef star Dan Churchill that claims to educate, motivate, and inspire men to cook. While Churchill's 2015 book does not focus on hamburgers and the like, it may have played a role in the term coming to prominence in 2016.

DUDE FOOD can be found everywhere from fast-food chains to the kitchens of respected chefs. DUDE FOOD also carries a connotation of "testosterone-driven gluttony," meaning there is usually a lot of it.

When I write DUDE FOOD, I mean this: 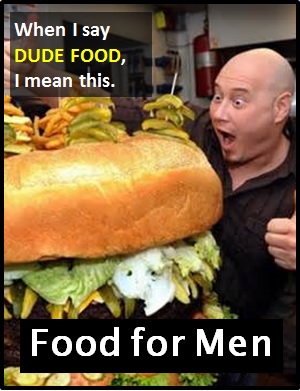 Examples of DUDE FOOD in Sentences

Here is an example of DUDE FOOD being used in a sentence:

An Academic Look at DUDE FOOD

Usually used as a noun, the term DUDE FOOD is an example of assonance (i.e., the repetition of a vowel sound).

Example of DUDE FOOD Used in a Text