DYLM means "Do You Love Me?". The abbreviation DYLM is a way of asking someone what their feelings are towards you. It can also mean "Do you like me?", which is the same sort of question but looking for clarification of a less intense emotion.

Of interest, "Do You Love Me?" was a 1962 single recorded by The Contours, written and produced by Motown CEO Berry Gordy Jnr. The British group The Tremeloes covered the track in 1963 and spent three weeks at No. 1.

When I write DYLM, I mean this: 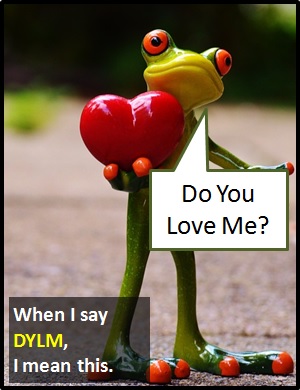 Examples of DYLM in Sentences

Here are examples of DYLM being used in conversations:

An Academic Look at DYLM

DYLM plays the role of an interrogative sentence (i.e., a question), but it is commonly seen without a question mark. In other words, it can be written "DYLM?" or "DYLM".

Example of DYLM Used in a Text