What Does D/S Mean?

D/S or D/s means "Dominance and Submission." It is commonly written with an uppercase 'D' and a lowercase 's' to signify Dominant and submissive.

In D/s relationships, one partner usually dominates the other, but the power is sometimes 'switched' too. In other words, a person can identify as dominant, submissive (sub), or switch.

It is common for couples not be D/s all the time. Such occasions often involve role playing power-based games, such as 'Doctors and Nurses,' 'Teacher and Student,' or 'Guard and Prisoner.'

When I write D/S, I mean this: 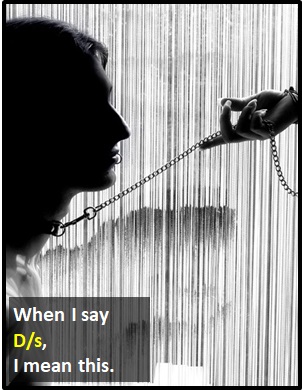 "Dominance and Submission" is the most common meaning for D/S on online dating sites, such as Craigslist, Tinder, Zoosk and Match.com, as well as in texts and on chat forums.

Examples of D/S in Sentences

Here is an example of D/s used online:

Example of D/S Used in a Text

DFS (dating for sport) E-FIT (careful editing of social media posts so they serve as an online dating profile.) E-DATING (online dating) LAYBY (someone you are dating while waiting for better options) POF (plenty of fish (dating website))