What Does FML Mean?

The abbreviation FML is used with the meaning "F*ck My Life" as an exclamation of annoyance or frustration when things are not going well. Although usually meant as a joke, FML can sometimes be used seriously, especially in response to a run of bad luck or the ending of a relationship. For example: The origins of the phrase "F*ck My Life" are unknown. However, the abbreviation FML was popularized in 2009 with the launch of the website www.fmylife.com, which contains user-generated stories of bad fortune. All of the stories end with "FML."

Extra emphasis is often added to FML by adding the letter "A" to represent the word "Actual," to make FMAL ("F*ck My Actual Life").

Here's a short video explaining how to use FML: In 2020, American rapper, singer, and songwriter Arizona Zervas released a track called "FML" on his "Living Facts" album:

When I write FML, I mean this: 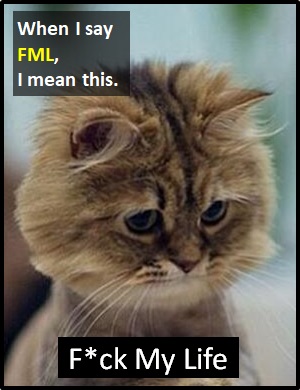 FML usually indicates that someone is having a bad day.

An Academic Look at FML

Before the digital era, we might have just said something like "I hate my life" instead of using FML.

Example of FML Used in a Text