The term FOOPA is a misspelling of the acronym FUPA, which stands for "Fat Upper Pubic Area." More specifically, FOOPA is the given for the excess subcutaneous fat (fat immediately under the skin) in the lower-abdominal region.

Both men and women can get FOOPAs, but the term is mostly used by women to describe their own bodies. Some men, on the other hand, describe a FOOPA as a GUNT, which is an extremely offensive term. (The word GUNT in an amalgam of the words GUT and C**T. The word GUNT is so crude that we won't feature it on Cyber Definitions. We have to draw a line somewhere!)

FOOPAs range in size from barely noticeable to very obvious. The following are recorded as common cases of FOOPAs:

When I write FOOPA, I mean this: 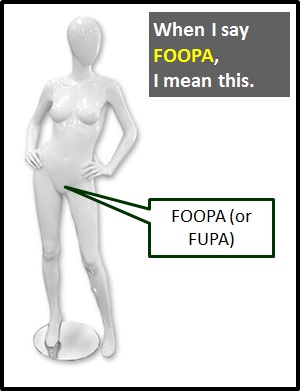 FOOPA is a misspelling of FUPA.

Examples of FOOPA in Sentences

Here is an example of FOOPA being used in a conversation:

An Academic Look at FOOPA

FOOPA cannot be classified as an acronym because it is a misspelling of FUPA (which is an acronym). FOOPA is best described as a neologism (a new word).

Example of FOOPA Used in a Text