What Is a FUPA?

A FUPA is a pubic pooch. It is an abbreviation for "Fat Upper Pubic Area."

More specifically, FUPA is the name given to the excess subcutaneous fat (fat immediately under the skin) in the lower-abdominal region. Many people have visible FUPAs. They can range in size from quite small and barely noticeable to much larger and very obvious.

What Causes a FUPA?

Some common cases of FUPAs are recorded as: A FUPA is sometimes called a panniculus, but this term is used in plastic surgery to describe loose skin in the abdominal region following rapid weight loss.

The term FUPA rocketed to international attention in September 2018, when American singer Beyonce Knowles used it in an interview with American Vogue Magazine. In the interview, Beyonce was quoted as saying, "But right now, my little FUPA and I feel like we are meant to be."

When I write FUPA, I mean this: 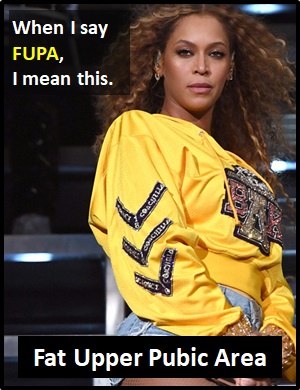 Beyonce was the proud owner of a FUPA.

Examples of FUPA in Sentences

Here is an example of FUPA being used in a conversation:

An Academic Look at FUPA

As it is spoken like a word, FUPA is an acronym. Acronyms contrast with initialism abbreviations, which are pronounced using their individual letters.

Example of FUPA Used in a Text