What Does FWB Mean?

The phrase "Friends With Benefits" refers to a couple who are good friends and, although they do not want a committed relationship with each other, enjoy sex together. The abbreviation FWB is typically used when discussing the relationship online or in text messages.

According to DrEd.com, 57% of respondents in a survey admitted to enjoying an "FWB relationship" at some point in their lives.

FWB has pretty much the same meaning as BFFWB "Best Friends Forever With Benefits".

When I write FWB, I mean this: 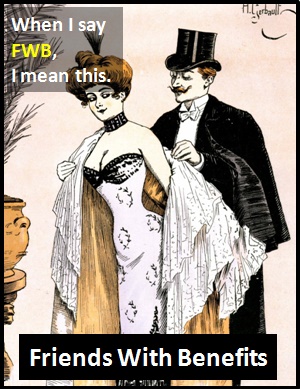 Being FWB can be risky.

Examples of FWB in Sentences

Here are examples of FWB being used in conversations:

An Academic Look at FWB

As it is pronounced using its individual letters (i.e., "Eff Dublyu Bee"), FWB is classified as an initialism abbreviation. Initialisms are different to acronyms, which are spoken like words.

"Friends With Benefits" is a noun phrase i.e., a group of words that plays the role of a noun. The head word in a noun phrase will be a noun or pronoun. In this case, the noun "Friends" is the head word.

Before the digital era, we would have just said "Friends With Benefits" instead of using the abbreviation FWB.

Example of FWB Used in a Text