What Does GBY Mean?

The abbreviation GBY is used with the meaning "God Bless You" to show gratitude or when saying goodbye. For example:

(Here, GBY expresses gratitude.) (Here, GBY is used to commend the recipient to the care of God during their journey.)

Of note, "God Bless You" is also often abbreviated as GBU. It means exactly the same as MGBY (May God Bless You).

When I write GBY, I mean this: 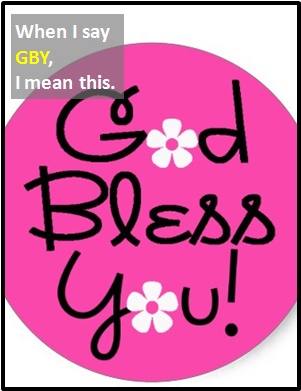 GBY is typically used when saying goodbye or to express gratitude.

Examples of GBY in Sentences

Here's an example of GBY being used in a joke:

An Academic Look at GBY

Before the digital era, we would have just said "God Bless You" instead of using the abbreviation GBY.

Example of GBY Used in a Text