What Does GF Mean?

The abbreviation GF has many meanings when used in text-based messaging and online. It is widely used with the meaning "Girlfriend" and (especially on dating sites) it is also used to mean "Gay Female." In gaming circles, GF is used to mean "Good Fight." Here is more information about each of these definitions of GF.

The most popular definition of GF is "Girlfriend." For example: Other terms used to mean "Girlfriend" include:

On online dating sites, GF is often used with the meaning "Gay Female." In this context, GF indicates that the poster is a gay woman or is interested in meeting gay women.

In online combat/fighting games, GF usually means "Good Fight." It is used to congratulate an opponent or teammate for their performance. For example: Other gaming abbreviations with similar meanings to GF include: Check out our a super video summarizing these and other definitions of GF!

When I write GF, I mean this: 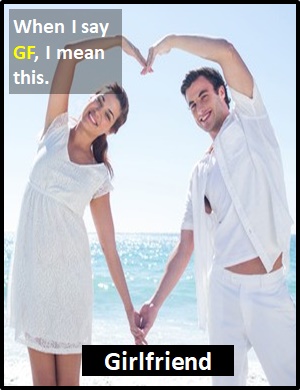 An Academic Look at GF

As it is pronounced using its individual letters (i.e., "Gee Eff"), GF is classified as an initialism abbreviation. Initialisms are different to acronyms, which are spoken like words.

Example of GF Used in a Text