What Does GSOH Mean?

The abbreviation GSOH is widely used on dating sites and in personal ads with a couple of meanings. Most often it means "Good Sense of Humor." However, it can also mean "Good Salary, Own Home."

The (relatively) recent emergence of this latter definition of GSOH has led to some confusion. The context of usage may indicate the intended meaning, but sometimes it may be necessary to ask for clarification. Nowadays, other than in personal ads that are paid for by the word, these terms are increasingly written in full to avoid this mix up. Confusion can also be avoided by using the abbreviation GSH for "Good Sense of Humor."

Here's a little more detail about each definition of GSOH.

When used with this meaning, GSOH indicates that the user considers themselves to be witty and entertaining. However, experienced users of dating sites will tell you that a claim of a "Good Sense of Humor" is actually very subjective. In reality, as there is no objective measure of such a trait, it actually offers no clue as to the poster's real character.

When used with this meaning, GSOH simply indicates that the poster is in a good job and owns their own home.

When I write GSOH, I mean this: 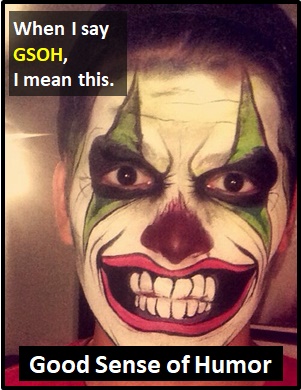 GSOH means "Good Sense of Humor." This is the most common definition for GSOH on online dating sites, such as Craigslist, Tinder, Zoosk and Match.com, as well as in texts and on adult chat forums.

Examples of GSOH in Sentences

Here is an example of GSOH being used in a sentence:

(In this example of a personal ad, it is impossible to know if the poster means "Good Sense of Humor" or "Good Salary, Own Home.")

An Academic Look at GSOH

GSOH is typically seen as an entry in list of personal attributes. When used in a complete sentence with the meaning "Good Sense of Humor," GSOH is used like a noun. When the term is expanded, it is a noun phrase based on the common noun Sense. The word Good and the prepositional phrase Of Humor serve as adjectives modifying the noun Sense.

When used with the meaning "Good Salary, Own Home," GSOH is used like a compound sentence, with the meaning "I get a good salary, and I have my own home" (i.e., it is not used as a part of speech within a wider sentence).

GSOH is an initialism abbreviation. This means it is pronounced using its individual letters (i.e., "Gee Ess Oh Aich"). (Initialisms contrast with acronyms, which are spoken like words.)

The use of the abbreviation GSOH long pre-dates the digital era.

Example of GSOH Used in a Text