What Does GME Mean?

GME means "Game Stop Stock." GME is the stock ticker symbol for an American video game retailer. It gained its notoriety in January 2021 when it became the 'Meme Stock' of the subreddit WallStreetBets (WSB.)

The company (and its stocks) declined during the mid-late 2010s due to the shift of video game sales to online storefronts and failed investments by GameStop in smartphone retail. This decline was taken advantage of by hedge funds who over-borrowed and over-sold GME stock causing a short. A user named DeepFuckingValue noticed that the stock was illegally shorted by 140% and posted his 'bets' on WSB.

In 2021, millions of WSB users orchestrated a short squeeze of the GME stock by collectively purchasing a large amount. The company's stock price skyrocketed initiating a battle between the internet and the hedge funds. The idea of a free market and hedge funds were called into question.

When I write GME, I mean this: 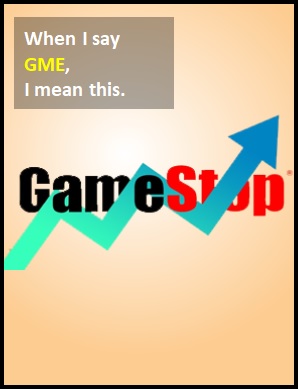 GME (Game Stop Stock) is the stock ticker for the video games retailer.

Examples of GME in Sentences

Here are examples of GME being used in conversations:

An Academic Look at GME

As it is pronounced using its individual letters (i.e., "Jee Em Ee"), GME is classified as an initialism abbreviation. Initialisms are different to acronyms, which are spoken like words.

Example of GME Used in a Text