What Does WSB Mean?

WSB means "Wall Street Bets." WSB (or r/wallstreetbets) is a subreddit on the popular social news and discussion website, Reddit. On this subreddit (often shortened to sub), participants discuss stock and option trading. It has become notable for its aggressive trading strategies, profane language, and gambling nature.

In January 2021, WSB's popularity reached an all-time high due to its role in the GameStop short squeeze that caused losses on short positions in U.S. firms. This short squeeze was responsible for $70 billion worth of loss for many hedge funds.

The subreddit is known for its profane and juvenile nature, with members often referring to themselves as "autists," "retards," and "degenerates."

Wall Street Bets is famous for its colorful jargon and terms. Users frequently use slang such as:

Retards: an anagram for traders Stonks: stocks Tendies: gains or profits Gay Bears: those who expect a stock to decline, a stock shorter, or as a general insult DD: analysis of potential trades (from due diligence) Bagholder: someone whose position has severely dropped in value Diamond Hands: someone who holds stocks adamantly Paper Hands: someone who sells too early

When I write WSB, I mean this: 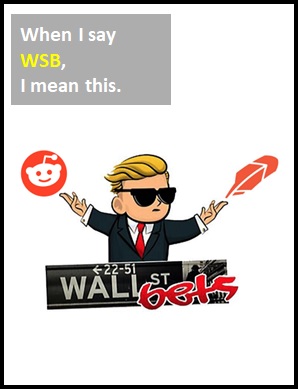 WSB (WallStreetBets) is a subreddit related to the stock market bets.

Examples of WSB in Sentences

Here are examples of WSB being used in conversations:

An Academic Look at WSB

As it is pronounced using its individual letters (i.e., "DoubleYoo Ess Bee"), WSB is classified as an initialism abbreviation. Initialisms are different to acronyms, which are spoken like words.

Example of WSB Used in a Text