What Does GTS Mean?

The abbreviation GTS has a number of definitions, including "Global Trading System (Pokemon)," "Going Through Sh*t," "Good Times," "Google That Sh*t," "Go To Sleep," and "Grim's Toy Show (Wrestling)." Here is a little more information about each of these definitions of GTS.

The Pokemon GTS is an online "Global Trading System" that allows players to trade characters. Access to the GTS depends on whether a player has a free or paid account.

GTS is also used with the meaning "Going Through Sh*t." In this context, it indicates that a person is dealing with (or has had to deal with) a lot of problems. In 2018, American rapper Machine Gun Kelly released a track entitled GTS. In the song, Kelly raps about the fact that he has been "Going Through Sh*t."

When GTS means "Good Times," it is used to wrap up a conversation reminiscing about a previous positive experience.

When used with the meaning "Google That Sh*t," GTS is a recommendation to look up something on the internet. It usually implies exasperation on the part of the sender.

GTS is probably most commonly used with the meaning "Go To Sleep." In this context it is typically used to end a conversation taking place late at night. It means "I'm tired, stop talking now." However, in professional wrestling, GTS usually refers to the "Go To Sleep" move used by some wrestlers to "finish-off" their opponent. The GTS finishing move was made famous in WWE by CM Punk.

GTS is also used with the meaning "Go To Sleep" when searching for the 2003 track by rapper Eminem, from the "Cradle 2 the Grave" film soundtrack album.

GTS Wrestling is a wrestling show that airs on the sillySUPERPOP YouTube channel. The owner and host of GTS is David Hitchens, better known by his ring name "Grim."

Video Summarizing Some of the Meanings of GTS

Here's a short video explaining how to use some of the main meanings of the abbreviation GTS:

When I write GTS, I mean this: 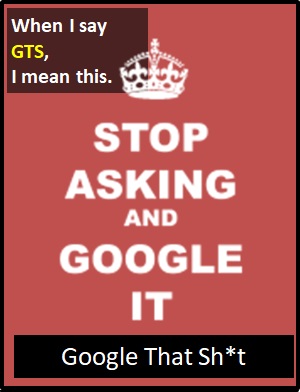 "Global Trading System (Pokemon)" is a common definition for GTS.

"Going Through Sh*t" is another definition for GTS.

"Good Times" is a very common definition for GTS.

"Google That Sh*t" is another common definition for GTS.

Examples of GTS in Sentences

Here are examples of GTS being used in conversations:

An Academic Look at GTS

As it is pronounced using its individual letters (i.e., "Gee Tee Ess"), GTS is classified as an initialism abbreviation. Initialisms are different to acronyms, which are spoken like words. However, GTS is not often spoken using its letters. It is usually employed for efficiency in writing and not efficiency in speech.

Example of GTS Used in a Text

GIY (Google it yourself) GIYF (Google is your friend) JGI (just Google it) LMGTFY (let me Google that for you) LTG (learn to Google) TGFG (thank God for Google!) G2S (go to sleep) G2G (got to go) G2G2B (got to go to bed) CRAIC (good times (an Irish term)) GTHBA (good times had by all) GTZ (good times)