What Does #TIMESUP Mean?

On 1 January 2018, more than 300 women in Hollywood (including executives, actors, agents, writers, directors, and producers), launched the #TIMESUP campaign with the message "TIME'S UP FOR SEXUAL ABUSE." The stated aim of #TIMESUP is to counter systemic sexism in industries across the United States. The launch of #TIMESUP was announced through ads in the New York Times and the Spanish Language newspaper La Opinión.

The #TIMESUP initiative grew out of the #METOO campaign and includes efforts to create legislation that will penalize companies that tolerate harassment. It will also discourage the use of the types of nondisclosure agreements that have been used to silence victims of sexual abuse. The mission of #TIMESUP is not only to reach gender parity, but also to connect victims of sexual harassment with legal representation through a legal defense arm that will be administered by the National Women's Law Center's Legal Network for Gender Equity.

When I write #TIMESUP, I mean this: 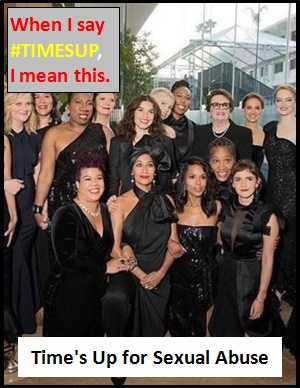 Hollywood stars wore black to the Golden Globe awards in
January 2018, in support of the #TIMESUP campaign.

Examples of #TIMESUP in Sentences

Here are examples of #TIMESUP being used in conversations:

An Academic Look at #TIMESUP

#TIMESUP is a hashtag, i.e., a word or phrase preceded by a hash sign (#). Hashtags are used on social media sites and apps, especially Twitter, to identify messages on a specific topic. Searching for messages with a specific hashtag will show each message that has been tagged with it.

Before the digital era, the hashtag #TIMESUP didn't exist. However, there have been many campaigns over the years with the message "TIME'S UP FOR SEXUAL ABUSE."

Example of #TIMESUP Used in a Text