What Does HCIT Mean?

HCIT means "How Cool Is That?". The abbreviation HCIT is generally used to express excitement or enthusiasm. Whether written with or without an exclamation mark or question mark, HCIT is typically used as a rhetorical response to some exciting or amazing news.

Of note, The word "cool" became widely used as slang in the 1930s with the meaning "fashionable." Nowadays, it is more often used to mean everything from "okay" to "excellent."

When I write HCIT, I mean this: 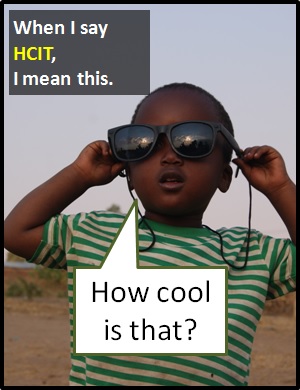 HCIT has nothing at all to do with temperature.

Examples of HCIT in Sentences

Here are examples of HCIT being used in conversations:

An Academic Look at HCIT

HCIT can play the role of an interrogative sentence (i.e., a question), expressing approval, but it is commonly seen without a question mark. In other words, it can be written "HCIT?", "HCIT" or even "HCIT!".

HCIT is typically used as a standalone declarative sentence (i.e., a statement). It is not often used as another part of speech within a wider sentence.

Before the digital era, we might have said something like "That's great!" or "Wow!" instead of using HCIT.

Example of HCIT Used in a Text