What Does HENRY Mean?

HENRY means "One-Eighth" and "High Earner Not Rich Yet." Here is more information about each of these definitions of HENRY, with examples of use.

In the UK, the name HENRY is used as slang for the fraction one-eighth. This usage of HENRY is a reference to the 16th-century King of England, Henry VIII (he of the six wives).

The use of HENRY to mean one-eighth is particularly common among drug users and dealers, for whom it is used to reference an eighth of an ounce of an illicit substance, such as marijuana or cocaine. For example:

High Earner Not Rich Yet

When used to mean "High Earner Not Rich Yet," HENRY is a reference to individuals who earn a high salary and have a chance of being wealthy in the future, subject to making the correct lifestyle and investment choices.

Due to the income range for their occupations, professionals such as accountants, lawyers, doctors, and dentists, can be classified as HENRYs. However, their wealth depends on their income. In order to realize their potential to become rich, they must keep working and invest wisely.

When I write HENRY, I mean this: 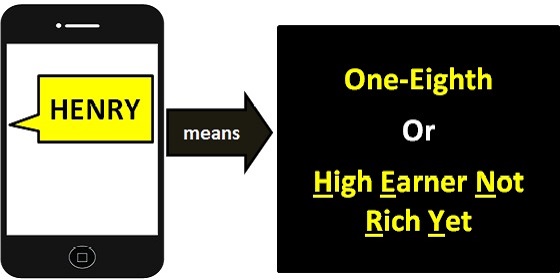 The use of HENRY to mean one-eighth is often related to a measure of drugs.

Summary of Key Points for the First Definition of HENRY

"One-Eighth" is the most common definition for HENRY in the UK, especially in drug-related chat.

"High Earner Not Rich Yet" is another common definition for HENRY.

Example of HENRY Used in a Text