What Does HM Mean?

The abbreviation HM is widely used used with the meaning "High Maintenance" to refer to a person (usually female) with expensive tastes. In this context, HM normally indicates that such a person will be expensive to date.

The abbreviation HM is also used to represent the sound some people make when thinking. Typically written or printed as Hmm or Hmmm, it is further abbreviated in text-based conversations to HM.

HM is also used with the meaning "No?" at the end of a (usually rhetorical) question, in order to elicit agreement. In this context HM is more often spoken than written.

HM is widely used throughout the English-speaking world, but particularly in the UK, as a written abbreviation for "Her Majesty" (or "His Majesty"). HM often precedes the name of the Monarch (e.g., HM Queen Elizabeth). It also precedes the name of many British government departments (e.g., HM Government, HM Armed Forces, HM Chief Inspector of Prisons).

When I write HM, I mean this: 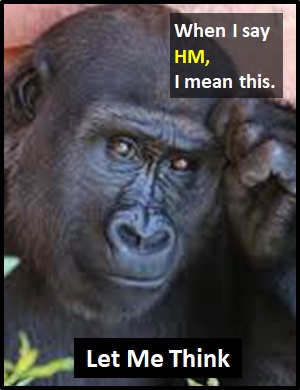 HM also means "High Maintenance," "No?" and "Her Majesty."

Examples of HM in Sentences

Here are examples of HM being used in conversations:

An Academic Look at HM

"High Maintenance" is a slang phrase. Slang refers to words, phrases and uses of language that are regarded as very informal and which are often restricted to a special context or a particular group of users.

When used with the meanings "Let Me Think" or "No?", HM is classified as an interjection. An interjection is a word added to a sentence to convey an emotion or a sentiment such as surprise, disgust, joy, excitement, enthusiasm or indecision. For example:

An interjection is not grammatically related to any other part of the sentence.

When used with the meaning "Her Majesty," HM is classified as an initialism abbreviation, as it is pronounced using its individual letters (i.e., "Aitch Emm").

Before the digital era, we would have just said something like "Let me think" or "No?" instead of using the abbreviation HM.

The use of HM to mean "Her Majesty" predates the digital era.

Example of HM Used in a Text