What Does HTBT Mean?

HTBT means "Had To Be There." The term "had to be there" or "you had to be there" (see YHTBT) is typically used after someone has retold a story of an incident at which they were present. If the retelling of the story doesn't invoke the right response from the audience, the narrator will often say "had to be there." The term can also be used by someone in the audience, in which case, it is a put-down of the teller's story. In effect, it's saying "yeah, that's boring." (On line, this will be abbreviated to HTBT or YHTBT.)

Although rarer, HTBT can also be used in the meaning "you should have been there" (i.e., you had an obligation to be there).

When I write HTBT, I mean this: 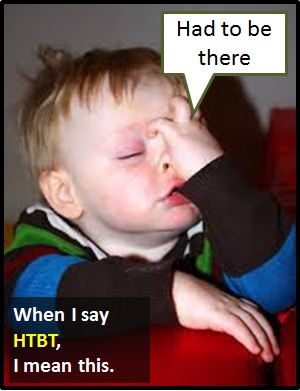 Examples of HTBT in Sentences

Here is an example of HTBT being used in a conversation:

An Academic Look at HTBT

HTBT is used as a standalone declarative sentence (i.e., a statement). In other words, it is not used as another part of speech within a wider sentence.

Of note, HTBT is an initialism abbreviation. Technically, this means it is pronounced using its individual letters (i.e., Aitch Tee Bee Tee), but as this is harder to say than "had to be there," it is not often uttered using its letters. In other words, the abbreviation HTBT is for efficiency in writing and not in speech.

Example of HTBT Used in a Text