What Does HYPEBEAST Mean?

When used as a derogatory term, hypebeast implies that such people are attempting to hide their character flaws by purchasing expensive and exclusive clothing and accessories. For example: Hypebeast is similar in use to terms such as fashionista and fop.

The popularity of the term hypebeast is widely credited to college student Kevin Ma, who created a blog in 2005, to document his fashion interests. Ma called his blog Hypebeast, even though it was already quite well established as a derogatory term well before that time.

When I write HYPEBEAST, I mean this: 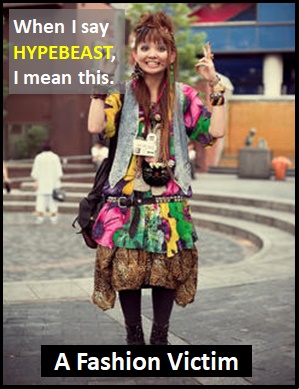 A hypebeast is usually derided by their peers.

An Academic Look at HYPEBEAST

As it is formed by merging two words into one, HYPEBEAST is a portmanteau word. It is a combination of the words Hype, as in "Extravagant or intensive publicity or promotion," and Beast, as in "Someone who demonstrates exceptional skill or dedication."

HYPEBEAST can also be considered a neologism (i.e., a newly coined word or term which has emerged into everyday usage). Some neologisms are formally accepted into mainstream language (at which point, they cease to be neologisms), and some wither until they can longer be considered everyday terms. A neologism can be:

Before the digital era, we might have just said "A Fashion Victim" instead of using HYPEBEAST.

Example of HYPEBEAST Used in a Text