What Does IBM Mean?

The abbreviation IBM is recognized throughout the world as the initials of one of the largest and best known companies in the IT industry. However, few people would probably guess that IBM actually stands for "International Business Machines Corporation." The fact that the company that produced the dominant computing platform during the 1960s and 1970s, and which set the standard for personal computers in 1981, has such an archaic name is down to the fact that IBM was given that name in 1924. (On its founding in 1911, the company was called the Computing-Tabulating-Recording Company!)

IBMs main offices are in Armonk, New York and the company now operates in over 170 countries. Due to a series of missteps, IBM lost its dominant role in the personal computer market. However, it continues to provide hosting and consulting services in areas ranging from mainframe computers to nanotechnology and is also a major research organization.

In business circles, IBM is often referred to by its nickname "Big Blue." The origins of the name are unclear, but is generally assumed to refer to the blue tint of the cases of IBM computers.

When I write IBM, I mean this: 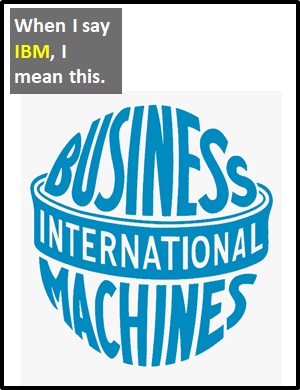 Examples of IBM in Sentences

Here's an example of IBM being used in a joke:

An Academic Look at IBM

As it is pronounced using its individual letters (i.e., "Eye Bee Emm"), IBM is classified as an initialism abbreviation. Initialisms are different to acronyms, which are spoken like words.

Example of IBM Used in a Text