What Does IDBI Mean?

IDBI means "I Don't Believe It." When taken literally, the abbreviation IDBI indicates that the sender believes that what they have just been told is false. However, IDBI is more often used to express exasperation, surprise or anger, rather than actual disbelief.

The phrase "I Don't Believe It!" was the catchphrase of Victor Meldrew, a famously dour character in the hit UK TV sitcom "One Foot In The Grave."

When I write IDBI, I mean this: 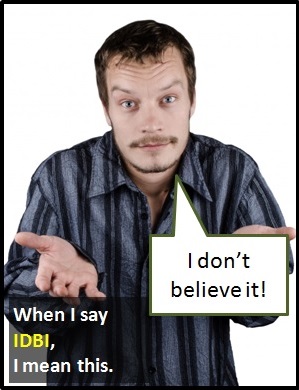 IDBI is usually an expression of surprise, exasperation or anger.

Examples of IDBI in Sentences

Here are examples of IDBI being used in conversations:

An Academic Look at IDBI

IDBI is an initialism abbreviation. Technically, this means it is pronounced using its individual letters (i.e., Eye Dee Bee Eye), but as this is harder to say than "I don't believe it," it is not often uttered using its letters. In other words, the abbreviation IDBI is for efficiency in writing and not efficiency in speech.

Before the digital era, we might have just said "I Don't Believe It" instead of using IDBI.

Example of IDBI Used in a Text