What Does IGI Mean?

The abbreviation IGI is used with the meaning "I Get It" or "I Got It" to indicate that a message has been received and understood.

IGI is similar in meaning to HUA (Heard, Understood, Acknowledged) and GETCHA (I Understand), but has completely the opposite meaning to IDU (I Don't Understand).

When I write IGI, I mean this: 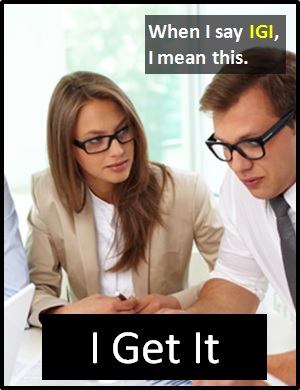 Examples of IGI in Sentences

Here are examples of IGI being used in conversations:

An Academic Look at IGI

IGI is an initialism abbreviation. Technically, this means it is pronounced using its individual letters (i.e., Eye Gee Eye), but as this is harder to say than "I Get It," it is not often uttered using its letters. In other words, the abbreviation IGI is for efficiency in writing and not efficiency in speech.

The word "get" is a verb (i.e. a doing word) and means to receive or obtain. The abbreviation IGI shows that someone has "received" or "obtained" understanding of something.

Before the digital era, we might have said something like "OK," "Understood," or even just "I Get It" instead of using IGI.

Example of IGI Used in a Text