IIWII means "It Is What It Is."

The abbreviation IIWII is commonly used with the meaning "It Is What It Is" to indicate acceptance of a situation. IIWII tends to be used as a negative phrase, as an expression of submission. However, it can also be used in a more positive way, to suggest that something or someone can be perceived as whatever you want them to be. For example, a baseball bat can be used for sport or as a weapon.

Liane Gabora Ph.D., writing on the online blog Psychology Today, in May 2014, suggested that the increasing use of the phrase "It Is What It Is" indicates a changing view in society, with people less willing to place other people or things into rigid categories.

When I write IIWII, I mean this: 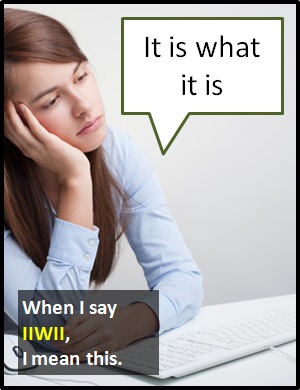 IIWII indicates acceptance of a situation.

Examples of IIWII in Sentences

Here are examples of IIWII being used in conversations:

An Academic Look at IIWII

IIWII is an initialism abbreviation. Technically, this means it is pronounced using its individual letters (i.e., Eye Eye Dublyoo Eye Eye), but as this is harder to say than "It Is What It Is," it is not often said using its letters. The abbreviation IIWII is for efficiency in writing and not efficiency in speech.

IIWII is typically used as a standalone declarative sentence (i.e., a statement). In other words, it is not normally used as another part of speech within a wider sentence.

Before the digital era, we might have said something like "What Will Be Will Be" or even just "It Is What It Is" instead of using IIWII.

Example of IIWII Used in a Text