IKTF (I Know The Feeling) is used to show empathy. It is typically used after someone tells you about their bad news. IKTF lets them know you have experienced the same emotion at the same intensity.

Of note, IKTF is not used to show sympathy, which is shown using the icon U.U

Remember, empathy is the ability to understand the feelings of another (having shared a similar experience) and sympathy is a feeling of sorrow for someone else's misfortune (due to a situation you have not experienced).

Read more about the difference between empathy and sympathy.

Here's a short video explaining how to use IKTF:

When I write IKTF, I mean this: 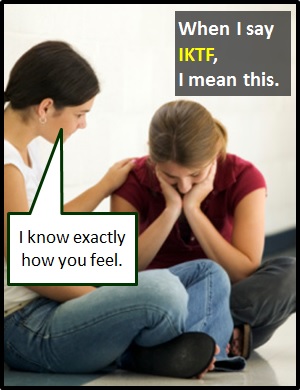 "I can fully empathize with you."

Examples of IKTF in Sentences

Here is an example of IKTF being used in a sentence:

An Academic Look at IKTF

IKTF is nearly always used as a standalone declarative sentence. In other words, it is not used as a part of speech within a sentence.

Of note, IKTF is an initialism abbreviation. This means it is pronounced using its individual letters (i.e., Eye Kay Tee Eff). Of note, initialisms contrast with acronyms, which are spoken like words.

Before the digital era, we would have written something like "I can empathize with you entirely" instead of IKTF.

Example of IKTF Used in a Text

IKTF
Help Us To Improve Cyber Definitions
Please tell us using this form.