ILYT means "I Love You Too."

The abbreviation ILYT is typically used with the meaning "I Love You Too" as a response to a message such as ILY (I Love You). However, it can also be used sarcastically, as a response to criticism or to an insult. For example:

(Here ILYT expresses a reciprocal feeling of love.) (Here is being used sarcastically.)

ILYT has exactly the same meaning as the abbreviation LYT (Love You Too).

"I Love You Too" is also commonly abbreviated as ILU2 and ILY2.

When I write ILYT, I mean this: 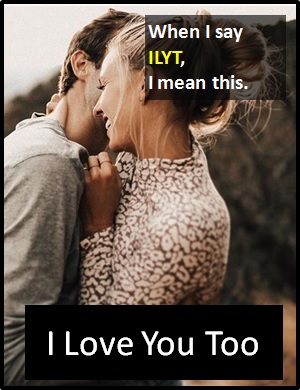 ILYT is usually a reciprocal statement.

Examples of ILYT in Sentences

Here are examples of ILYT being used in conversations:

An Academic Look at ILYT

ILYT is an abbreviation of "I Love You Too" and is typically used as a standalone declarative sentence , (i.e., a statement). It is not often used as another part of speech within a wider sent sentence.

Before the digital era, we would have just said "I Love You Too" instead of using ILYT.

Example of ILYT Used in a Text