ILUT is mostly seen as a response to a declaration of love using one of the following: (Here is a list of other ways of saying "I love you.")

When I write ILUT, I mean this: 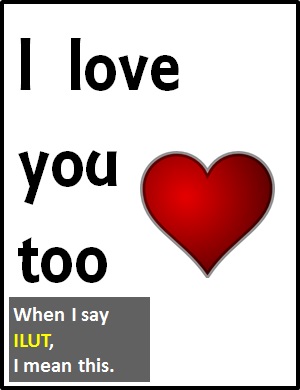 ILUT (I Love You Too) is a response to a declaration of love.

Examples of ILUT in Sentences

Here are examples of ILUT being used in conversations:

An Academic Look at ILUT

ILUT is used as a standalone declarative sentence (i.e., a statement).

Of note, ILUT is classified as a cyber term. It is not an initialism abbreviation or an acronym because the "U" is not the initial letter of "you."

Before the digital era, we would have just said "I love you too" instead of ILUT.

Example of ILUT Used in a Text