What Does IOU Mean?

IOU is a common shorthand for "I owe you," which has been in existence since at least the early 1800s. The abbreviation IOU is usually followed by an amount of money, an item, or a service (i.e., the thing owed). For example:

An IOU (i.e., a physical slip of paper) is a written acknowledgement of a debt. A full IOU would be addressed to the creditor, signed and dated by the debtor.

When I write IOU, I mean this: 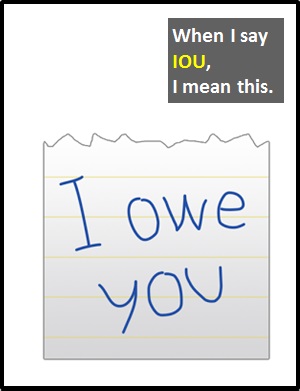 An I.O.U. is a written acknowledgement of a debt.

Examples of IOU in Sentences

Here are examples of IOU being used in conversations:

An Academic Look at IOU

When IOU is shorthand for "I owe you" and followed by a direct object (i.e., the thing owed), it is most often used as a standalone declarative sentence (i.e., a statement of fact). However, when IOU denotes a physical slip of paper, it is used as a noun.

The term IOU was popular long before the digital era. It has been in use since at least the early 1800s.

Example of IOU Used in a Text