What Does JEET Mean?

JEET means "Did You Eat?". The word JEET is how you might hear the words "Did You Eat" if they are said quickly and with no gaps between the words. JEET is used to enquire whether someone has eaten recently.

In text-speak, JEET is typically used as a precursor to a suggestion to meet up for a meal or snack, but it may also be used in general chat, e.g., to enquire as to whether someone ate out on a date.

When I write JEET, I mean this: 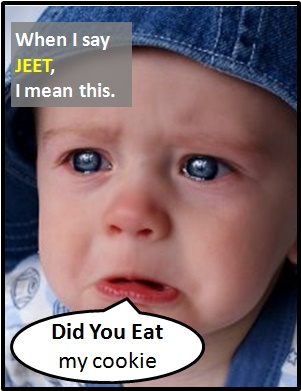 JEET may not always be a precursor to an invitation to eat.

Examples of JEET in Sentences

Here are examples of JEET being used in jokes:

An Academic Look at JEET

JEET is typically used as an interrogative sentence (i.e., a question), but it can be used as a clause within a wider sentence. For example:

Example of JEET Used in a Text

JEET
Help Us To Improve Cyber Definitions
Please tell us using this form.