What Does JUNETEENTH Mean?

JUNETEENTH is a Federal Holiday Commemorating the Emancipation of Slaves.

In the US, Juneteenth is a federal public holiday that commemorates the emancipation of enslaved Black Americans after the American Civil War. It is a combination of the words "June" and "nineteenth."

On June 19 1865 (more than two months after the end of the war), Union forces occupied Galveston, Texas and issued a decree freeing the last of the slaves held there. Since that date, Juneteenth has been marked as a day of celebration and remembrance by the Black American community. In 1980, Juneteenth was recognized as a state public holiday in Texas and, in 2021, it was officially declared a federal public holiday.

When I write JUNETEENTH, I mean this: 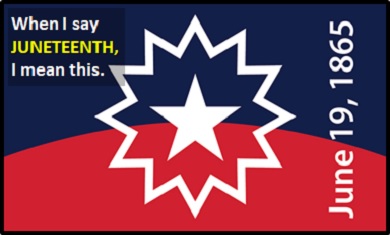 An Academic Look at JUNETEENTH

As it is formed by merging two words (or parts of words) into one, Juneteenth is classified as a portmanteau word. It is formed by amalgamating the word June with teenth (from "nineteenth").

Other examples of portmanteau words are smog (smoke and fog) and brunch (breakfast and lunch) .

Example of JUNETEENTH Used in a Text