What Does KFY Mean?

KFY means "Kiss For You."

The abbreviation KFY is used with the meaning "Kiss For You" as an affectionate and informal way of signing off a conversation. The use of KFY usually implies gratitude or affection. It could be used between partners or close friends, but never in a business or formal situation.

KFY is one of many ways of sending kisses. Others include:

When I write KFY, I mean this: 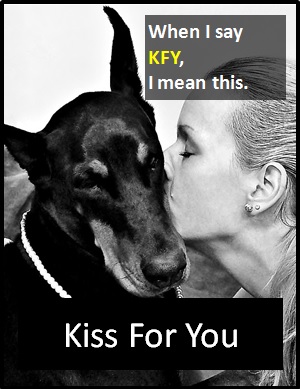 KFY can be affectionate as well as romantic.

Examples of KFY in Sentences

Here are examples of KFY being used in conversations:

An Academic Look at KFY

As it is pronounced using its individual letters (i.e., "Kay Eff Why"), KFY is classified as an initialism abbreviation. Initialisms are different to acronyms, which are spoken like words.

Before the digital era, we might have said something like "Sending you a big kiss" instead of using the abbreviation KFY.

Example of KFY Used in a Text