What Does XX Mean?

XX means "two kisses." (Sometimes, the kisses are in lowercase, sometimes they're in uppercase, and sometimes a mix of both.)

As a general rule, an uppercase X represents a big kiss, and a lowercase x is a light kiss (a peck). However, be aware that "Xx" does not always mean a large kiss and a peck. Most often, it is simply the messaging app capitalizing the X after some end punctuation (e.g., a full stop (period), an exclamation mark, or a question mark).

You should also guard against treating XX as a sign of affection. If you've been sent two Xs, then there's a fair chance the sender is being affectionate. (Generally, the number of Xs sent is proportional to the level of affection.) However, if you've been sent one X, be aware that one X is often used simply to add a warm tone to a message. (NB: An X at the end of a message is so common among friends that failing to use one is increasingly considered a snub or a sign of being annoyed.)

Here is a table showing the possible meanings of Xs at the end of a message:

When I write XX, I mean this: 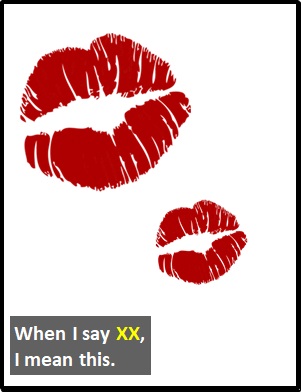 Examples of XX in Sentences

Here are examples of XX being used in conversations:

An Academic Look at XX

Back in the Middle Ages, a lot of people were illiterate and could only manage an X, which also represented the Christian cross. As a result, many people signed letters and sealed envelopes with an X, which they then kissed as a sign of faith and honesty. It is also reported that an X represents the symbol for Christ, deriving from ΧΡΙΣΤΟΣ (the Greek word for Christ).

Under the first idea, an X is classified as a symbol rather than a letter. Under the second, it is a letter, making it an initialism abbreviation.

Example of XX Used in a Text

What does XXXX mean? New ways to say I love you Text-speak using just numbers A list of dating terms Using the Greek-letter symbols Using the punctuation symbols