What Does KML Mean?

The abbreviation KML is typically used with the meaning "Killing Myself Laughing" as an indication of amusement, in the same way as LOL (Laughing Out Loud), DOFL (Dying On Floor Laughing) and other such abbreviations. However, just like many of those other abbreviations, KML can also be used sarcastically, to indicate that the sender did not find something even slightly funny.

"Killing Myself Laughing" can also be abbreviated as KMSL .

In computing, KML means "Keyhole Markup Language." In this context, KML is a format used in internet-based mapping. KML was developed for use with Google Earth and became an international standard of the Open Geospatial Consortium in 2008.

When I write KML, I mean this: 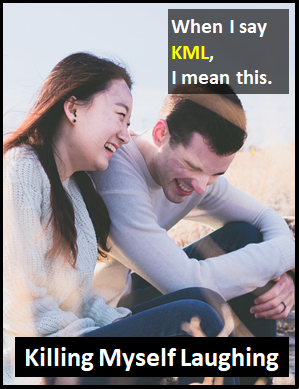 Examples of KML in Sentences

Here are examples of KML being used in conversations:

An Academic Look at KML

As it is pronounced using its individual letters (i.e., "Kay Em Ell"), KML is classified as an initialism abbreviation. Initialisms are different to acronyms, which are spoken like words.

Before the digital era, we might have said something like "That's so funny!" or "Very funny" instead of using the abbreviation KML.

Example of KML Used in a Text