What Does KMN Mean?

The abbreviation KMN is typically used with the meaning "Kill Me Now" as an ironic and humorous response to bad news or to a situation that the sender considers so bad that they would rather die than endure it.

"Kill Me Now" may have originated from a scene in the 1979 science fiction film Alien, where a human is found suffering unspeakably in a cocoon and begs to be put out of his misery.

When I write KMN, I mean this: 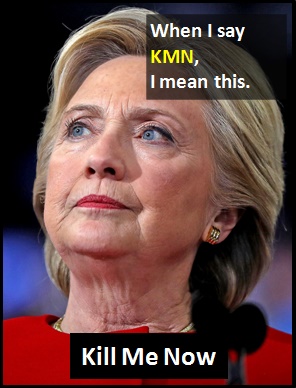 KMN! I would rather die than face this!

Examples of KMN in Sentences

Here are examples of KMN being used in conversations:

An Academic Look at KMN

As it is pronounced using its individual letters (i.e., "Kay Em En"), KMN is classified as an initialism abbreviation. Initialisms are different to acronyms, which are spoken like words.

KMN is typically used as an imperative sentence (i.e., an order), but is said humorously.

Before the digital era, we would have just said "Kill Me Now" or something like "Please Say You're Joking" instead of using KMN.

Example of KMN Used in a Text