What Does KTF Mean?

KTF is often used at the end of a conversation with the meaning "Keep The Faith." It is a light-hearted way of saying goodbye.

The phrase "Keep The Faith" probably stems from the Biblical idea to remain steadfast in your faith in God. However, it is now much more widely used as a phrase of encouragement or reassurance. In activist circles (such as Black Lives Matter and the 381 Movement) it is used as encouragement to members to continue to believe in what they are doing. In sporting circles, it is often used to encourage fans to continue to support their team when it is playing poorly.

In the UK, "Keep The Faith" was a popular saying amongst fans of Northern Soul music, which grew out of the 1960s Mod culture.

"Keep The Faith" is the title of a 1991 song by Michael Jackson (from the album "Dangerous") and a 1992 album by American rock band Bon Jovi.

In gaming, KTF is used with the meaning "Kill Them First." In this context, KTF is a war cry, particularly popular among followers of the Galaxy's Edge military science fiction franchise, started by authors Jason Anspach and Nick Cole. Many of the followers of Galaxy's Edge are former military personnel, and use KTF similarly to how US soldiers use HOOAH!

When I write KTF, I mean this: 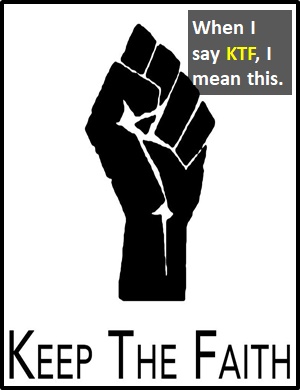 "Kill Them First" is a common definition for KTF in gaming circles.

Examples of KTF in Sentences

Here are examples of KTF being used in conversations:

An Academic Look at KTF

Whether used with the meaning "Keep The Faith" or "Kill Them First," KTF is classified as an initialism abbreviation, as it is pronounced using its individual letters (i.e., "Kay Tee Eff"). Initialisms are different to acronyms, which are spoken like words.

KTF is typically used as an imperative (i.e., an order). It can be followed by a period (full stop) or an exclamation mark, depending on the forcefulness of the command. However, for purposes of brevity in text-based messaging, punctuation such as exclamation and question marks is often omitted.

Example of KTF Used in a Text