What Does KYS Mean?

The abbreviation KYS has a number of meanings, including "Kill Yourself," "Keep Yourself Safe," and "Know Your Students." Here is more information about each of these definitions of KYS.

The abbreviation KYS is most commonly used with the meaning "Kill Yourself." KYS is not normally meant to be as mean or nasty as it sounds. It is typically used jokingly or sarcastically and should not be taken literally. Usually. KYS is just a friendly way of expressing exasperation with something that has been said. It typically implies that the comment was silly or inappropriate.

In this context, KYS is similar in meaning to abbreviations such as GAC (Get A Clue), GAL (Get A Life) and GKY (Go Kill Yourself).

As with the meanings of many abbreviations, context is key to understanding what is actually meant.

In the field of education, KYS is often used by teachers, with the meaning "Know Your Students." In this context, it refers to the importance of ensuring classes are tailored to the audience.

When I write KYS, I mean this: 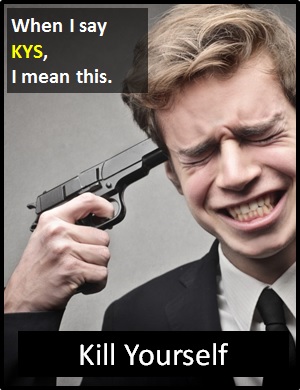 KYS is usually meant jokingly. It can also mean "Keep Yourself Safe" and "Know Your Students."

"Keep Yourself Safe" is another definition for KYS.

Examples of KYS in Sentences

Here are examples of KYS being used in conversations:


(Here, KYS is being used to mean both "Kill Yourself" and "Keep Yourself Safe.")


(Here, KYS is being used with the meaning "Know Your Students.")

An Academic Look at KYS

When used with the meanings "Kill Yourself" or "Keep Yourself safe," KYS is an imperative (i.e., an order). However, as it should not be taken seriously, it is an example of figurative language.

Before the digital era, we might have said something like "Go kill yourself" or "Go take a jump," instead of using KYS to mean "Kill Yourself.".

Example of KYS Used in a Text