What Does LAWD Mean?

The word LAWD is an alternative spelling of the word "Lord." It is often typed or written in phrases such as "Oh my Lawd," "Dear Lawd," and "Lawd be praised."

This misspelling of the word "Lord" possibly originated as a (not very effective) way for some Christians to avoid taking the Lord's name in vain (as required by their faith). It may also be based on the pronunciation of the word "Lord" in the accent of certain southern states of the US.

When I write LAWD, I mean this: 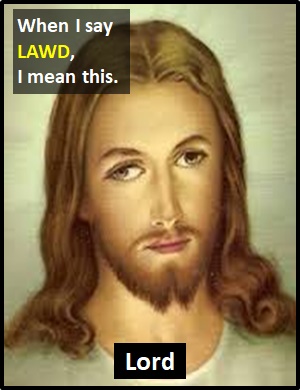 LAWD is an alternative spelling of "Lord."

Examples of LAWD in Sentences

Here are examples of LAWD being used in conversations:

An Academic Look at LAWD

The use of LAWD as an alternative spelling of "Lord" long pre-dates the digital era.

Example of LAWD Used in a Text