What Does LBD Mean?

The abbreviation LBD has a number of meanings, including "Led By Donkeys," "Lewy Body Dementia," "Lesbian Bed Death," and "Little Black Dress." Here is more information about each of these definitions of LBD.

Particularly in the UK, LBD means Led By Donkeys. LBD is a political campaign group which operates through the use of satire targeted at politicians, mainly in the UK, but also in the US.

LBD emerged in December 2018, when it began a campaign against the exit of the UK from the European Union (BREXIT), using billboards to publish tweets by pro-BREXIT politicians which contradicted their claimed stance on the issue. Since preventing BREXIT became a lost cause, the group has continued to target a range of issues and personalities, especially Prime Minister Boris Johnson and President Donald Trump.

What Boris used to say about Donald Trump

The name "Led By Donkeys" comes from the phrase "Lions led by donkeys," which is used to refer to British soldiers during the First World War (the "lions") who were led to their deaths by incompetent and indifferent officers (the "donkeys").

LBD also means "Lewy Body Dementia." This is the second most common type of progressive dementia after Alzheimer's disease. Like Alzheimers, LBD causes a progressive decline in mental abilities. In 2015, actor Robin Williams was reported to have had the disease.

Further information and advice can be found on the Lewy Body Dementia resource Center website.

LBD is also used in sexual therapy and more generally with the meaning "Lesbian Bed Death." In this context, LBD refers to the decline and cessation in sexual activity between a lesbian couple.

When used with the meaning "Little Black Dress," LBD refers to a black dress (usually quite short) which can be worn to any event and which always looks appropriate and stylish. According to many "fashionistas," every woman has (or should have) an LBD in her wardrobe.

According to fashion historians, the phrase "Little Black Dress" was coined by fashion designer Coco Chanel in the 1920s, to describe a smart, but affordable, classic dress.

When I write LBD, I mean this: 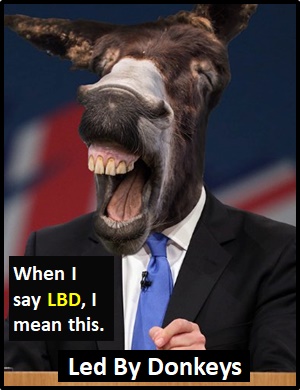 "Lewy Body Dementia" is a common definition for LBD in medical and care circles.

"Lesbian Bed Death" is another definition for LBD.

Examples of LBD in Sentences

Here are examples of LBD being used in conversations:

An Academic Look at LBD

As it is pronounced using its individual letters (i.e., "Ell Bee Dee"), LBD is classified as an initialism abbreviation. Initialisms are different to acronyms, which are spoken like words.

Example of LBD Used in a Text