What Does LOB Mean?

Here is a more information about each of these definitions of LOB, with examples of use.

Lob is a synonym for the word "throw." More specifically it means "to throw an object high in the air, in a curve."

In sport, a lob is throwing or kicking the ball over an opponent.

LOB is used to refer to a "long bob" haircut, which is a bob hairstyle that extends past the shoulders. For example:

LOB is an abbreviation for "Line of Business." In this context, LOB is a term that describes the products or services offered by a business or manufacturer. It is also used in general chat as a synonym for "job." For example:

"Lob on" is a slang term for an erection. It is most commonly seen in the term "semi-lob on" (sometimes referred to as a "Simon LeBon"), which means not a full erection. For example:

LOB is also sometimes used to mean "Lying on Bed." For example:

When I write LOB, I mean this: 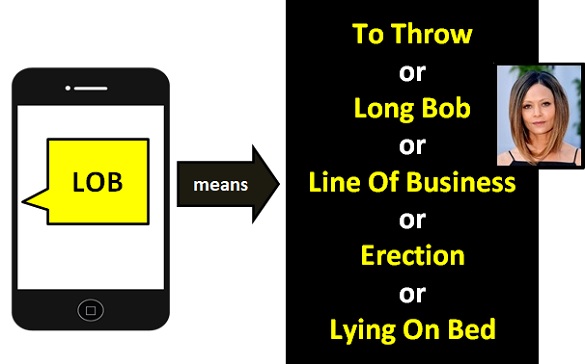 LOB has a number of different meanings.

"Long Bob" is another definition for LOB.

"Line of Business" is another definition for LOB.

LOB is also used to mean "Lying on Bed".

An Academic Look at LOB

When used to mean "Line of Business" and "Lying on Bed," LOB is an initialism abbreviation. Technically, this means it is pronounced using its individual letters (i.e.,Ell Oh Bee).

When used to mean "erection," LOB is a slang word. Slang refers to words, phrases and uses of language that are regarded as very informal and which are often restricted to a special context or a particular group of users.

When used to refer to the hairstyle, LOB is a portmanteau word. It is made up of "Long" and "Bob."

A portmanteau word is one that takes part of other words to form one word. (SPEXY (Spectacles and Sexy) is another example.)

Example of LOB Used in a Text