LYLC means "Love You Like Crazy." The abbreviation LYLC is a light-hearted way of telling someone that you love them a lot.

The use of LYLC in text messaging is usually only appropriate between couples. LYLC is not an abbreviation that would normally be used outside of a romantic relationship, except perhaps between young children and very close family members.

When I write LYLC, I mean this: 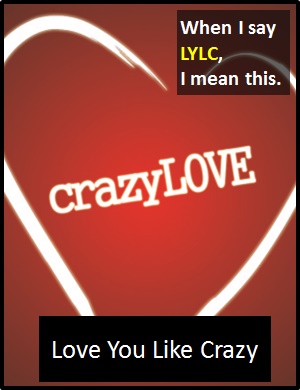 Examples of LYLC in Sentences

Here are examples of LYLC being used in conversations:

An Academic Look at LYLC

LYLC is an initialism abbreviation. Technically, this means it is pronounced using its individual letters (i.e., Ell Why Ell See), but as this is harder to say than "Love You Like Crazy," it is not often uttered using its letters. In other words, the abbreviation LYLC is for efficiency in writing and not efficiency in speech.

The abbreviation LYLC is normally used as a standalone declarative sentence (i.e., a statement) with the meaning "Love You Like Crazy." LYLC is not often used as another part of speech within a wider sentence.

Example of LYLC Used in a Text